Starting in Oct 2012, I spent several months volunteering part of my “free” time to build and improve Romibos. Romibo is a cute little furry robot developed to help autistic kids to improve their social skills, and designed by Aubrey Schick, founder of Origami Robotics: one more startup spun off of CMU’s fertile gene pool. 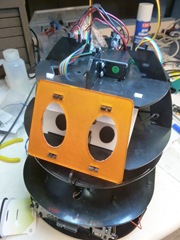 Different from all the previously developed robot pets, Romibo was originally intended to be affordable, programmable, controllable and (since it runs on Arduino) open source. You could create your own gestures, behaviors and sounds, you could even make it whistle like R2 if you wanted and control it with an iPad. Romibo is designed to be a robust-yet-flexible platform for the development of social skills therapies. It also encouraged the creation of a community of researchers, makers and hackers that amazed us with some awesome hacks.

It seems that over the months I worked on the project the scientific community developed great interest in the little furry guys as they presented a very flexible (and affordable) platform to perform research on therapies to treat autistic children. Because of such interest, Origami planned on selling dev kits for scientists and research centers, and also kits to parents and to the general public.

The first research “beta” version was planned to be launched for about $700. These comparably inexpensive first orders, mainly intended for research centers and universities, would (hopefully) generate enough research and cashflow to enable the team to develop the commercial kits for the general public, which were intended to have a target price of around $200. 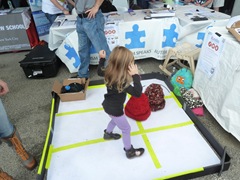 Kids loving the Romibos at the NY Maker Faire 2012

My contributions to the project were varied, from coaching volunteers to applying and negotiate initial seed funding. I helped to build several demo prototypes that were demonstrated at the Maker Faire NYC and the Mini Maker Faire in Pittsburgh. I also built and tested the prototypes that were used to evaluate the system with elders and autistic kids in several research locations around Pittsburgh. I helped debug parts of the code and improve the chassis for manufacture and assembly and the drive for durability. I got fully involved in the project and I loved it.

The only thing I missed was time. Time build my own Romibo and to incorporate my own homemade hack. Ideas weren’t lacking: From adding a webcam to making an off-road version and tweaking the Wifi card to expand its connectivity capabilities into the IoT and upload stuff (like pics of your inner kid interacting with it) to the cloud.

You can learn more about Romibo at Origami Robotics, and also in this short article by Engadget, where you’ll be able to see my own Romibo in action, it’s the naked one (of course)!